About the Ontario Fire Buff Associates

At the 1968 SPAAMFAA national convention in Syracuse, NY a number of buffs from Southern Ontario happened to become acquainted with each other and subsequently decided that it might be a good idea to form a SPAAMFAA chapter or similar Buff group north of the border. 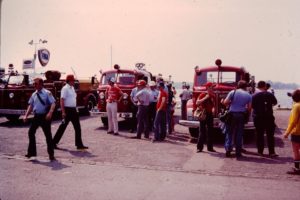 It was, however, three years before the Ontario Fire Buffs Association came into being with the thought of having a central connecting point which would not only attract people with similar interests in the fire service but offer them the opportunity to share information about the fire services in Ontario through a bi-monthly newsletter known as the “Third Alarm”.
In 1979, the Association had the opportunity to obtain ownership of a piece of fire apparatus and for legal reasons was incorporated under our present name, the Ontario Fire Buff Associates, more commonly known as the OFBA.
Our members come from many walks of life and their “common interest” in the fire service is very diverse. “Interests” include canteen / rehab services to fire departments; fire department histories; fire and apparatus photography; collecting and preserving antique fire apparatus and equipment; attending fire service musters; shoulder patch collecting, monitoring fire service Communications and building / collecting scale model fire apparatus.

We always like to hear from Fire Buffs locally and around the globe. Feel free to contact us by e-mail below or by mail and we’d be happy to communicate with you!